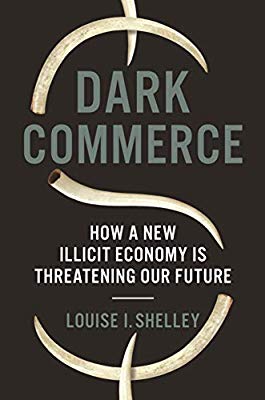 A comprehensive look at the world of illicit trade. Though mankind has traded tangible goods for millennia, recent technology has changed the fundamentals of trade, in both legitimate and illegal economies. In the past three decades, the most advanced forms of illicit trade have broken with all historical precedents and, as Dark Commerce shows, now operate as if on steroids, tied to computers and social media. In this new world of illicit commerce, which benefits states and diverse participants, trade is impersonal and anonymized, and vast profits are made in short periods with limited accountability to sellers, intermediaries, and purchasers.

Louise Shelley examines how new technology, communications, and globalization fuel the exponential growth of dangerous forms of illegal tradethe markets for narcotics and child pornography online, the escalation of sex trafficking through web advertisements, and the sale of endangered species for which revenues total in the hundreds of millions of dollars. The illicit economy exacerbates many of the worlds destabilizing phenomena: the perpetuation of conflicts, the proliferation of arms and weapons of mass destruction, and environmental degradation and extinction. Shelley explores illicit trade in tangible goodsdrugs, human beings, arms, wildlife and timber, fish, antiquities, and ubiquitous counterfeitsand contrasts this with the damaging trade in cyberspace, where intangible commodities cost consumers and organizations billions as they lose identities, bank accounts, access to computer data, and intellectual property.

Demonstrating that illicit trade is a business the global community cannot afford to ignore and must work together to address, Dark Commerce considers diverse ways of responding to this increasing challenge.
This book is published by Princeton Univers. Press, 24,46 Euro – now available at Amazon

Pressestimmen
” Dark Commerce argues that economic globalization in the last three decades has facilitated illicit trade on an unprecedented scale. This comprehensive book describes and analyzes organized crime in its contemporary manifestation while at the same time placing it in a historical context. With a huge quantity of data, this work makes a significant contribution to understanding the power of organized crime today and the need for much stronger recognition of its impact.” –Laurence Cockcroft, cofounder of Transparency International and author of Global Corruption

One thought on “BuchTipp – Dark Commerce: How a New Illicit Economy Is Threatening Our Future”